15 National Parks in Tanzania You Should Visit

Leading Tour operators in Tanzania is organising Tanzania tourism packages for various locations in South Africa, and we the Adventure Heroes here by give you information on 20 National Parks in Tanzania which is the best for Tanzania Safari.

The top 15 National Parks in Tanzania

Tanzania is one of Africa’s most dynamic and popular travel destinations – offering the best of both safari and sea.
Tanzania has more natural tou rlst attractions than most other oountnes on the continent -becoming known as the best safari destination in Africa. Complemented by lts magnifioent beaches and Islands, Tanzania offers It all. The spectacular country draws large numbers· of travellers from all over the earth. Here is the list of national parks in Tanzania.

The 15 Declared National Parks by TANAPA

In Northern Tanzania. Moshi National Park’s 552km2 area is a diversity of habitats. Montane forest surrounds the Ngurdoto Crater, which teams with wildlife. The Mom€1a Lakes are visited by thousands of flamingos. The peak of Kilimanjaro is visible on the horizon, but most dominant In the park is Moun Meru at 4,566m.

At 52km2, Gombe is Tanzania’s smallest National Park It Is a fragile strip of chimpanzee habitat neighbouring the steep slopes and river valleys around the northern shore of Lake Tanganyika. Its chimps were made famous by the pioneering work of Jane Goodall, whose behavioural research program Is the longest-running study of its kind in the world.

Isolated, quiet and unspoilt, Katavi is a true wilderness, providing a taste of Africa as it was. Tanzania’s third largest national park at 4.4 71 km2. It lies In the southwest, of the country, within the Rift Valley, ending In the shallow expanse of Lake Rukwa. Game viewing Is focused on the Katuma River and Its floodplains, such as the seasonal Lakes Kata and Chada. In the dry season. the Katuma becomes a rare source of drinking water – drawing an abundance of hippos and 4,000 elephants.

Not only is it the highest peak in Africa. Kilimanjaro is also the tallest free-standing mountain in the world. rising from the surrounding plains at 900m to 5,895m. It is one of the world’s most accessible high summits; a beacon for visitors from around the world who reach either the summit at Uhuru Point. or Gillman’s Point on the crater edge. The Kilimanjaro National Park Is 1668km2 and Its boundary lies at the 2, 700m Contour.

Referred to by locals as The Garden of God and The Serengeti of Flowers by botanists, Kithostsosls one of the great floral spectacles of the world. It is home to 350 species of vascular plants. including 45 varieties of terrestrial orchid – forming a wildflower display during the rainy season. Perched at 2600m between the rugged peaks of the Kipengere. Poroto and Livingstone Mountains and, with an area of 412.9km2, Its well-watered volcanic soils support the largest montane grassland In Tanzania.

At 1613km2, Mahale Mountains National Park is home to some of Africa’s remaining wild chimpanzees; a population of roughly 800. Mahel’s mountain ridge is 50km in length and runs across the park. Its tallest peak, Mt. Nkungwe, rises 2462m- the highest point on Lake Tanganyika’s shoreline. The western slopes from a gigantic wall that plunges deep in to the Lake 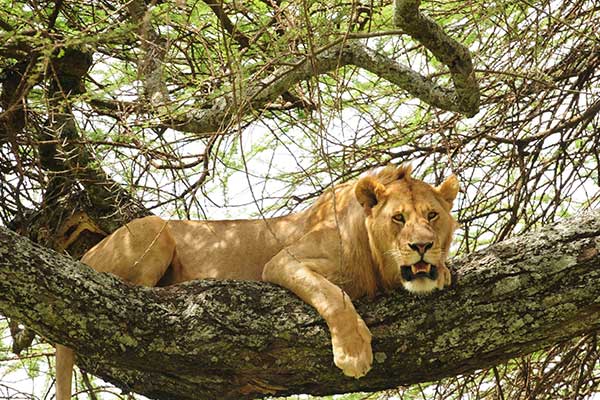 Stretching for 50km along the base of the 600m high Rift Valley escarpment with an area of 330km2, Lake Manya National Park was described by Ernest Hemingway as “the loveliest I had seen in Africa”. The compact game viewing circuit through Manyata encapsulates the Tanzanian Safari Experience. An expanse of lush groundwater forest of ancient mahogany trees are contrasted by grassy floodplain with views across the alkaline lake to the volcanic peaks of the Masai Steppes. Manyara’s acacia woodland is home to its legendary elephants and tree-climbing lions.

Mikumi National Park borders Africa’s biggest game reserve-the Selous*and is dissected by the tarred road between Dar es Salaam and Iringa. Its floodplain forms the centrepieces and abounds with wildlife. A major attraction is the hippos at the pools near the entrance.At 3230km2. Mikumi is the fourth largest park in Tanzania and part of a much larger ecosystem.

Below the slopes of the Usambara and Pare Eastern Arc Mountain ranges near Kilimanjaro. Mkomazi offers a bridge between the northern safari circuit and coastal attractions. At 3245km2, Mkomazi is easily accessible. Mikomazi is a refuge for two highly endangered species – the black rhino and African wild dog. A game reserve since 1951, its name means “scoop of water”

Ruaha National Park is famous for rare game viewing and fascinating landscapes. With an untouched ecosystem, the Great Ruaha River is the lifeline of the park and flows for 160km along the entire eastern boundary through rugged gorges and open plans. It was gazetted by Germany in 1910 and named Rungwa Game Reserve in 1946 under the British. In 2008, Usangu Game Reserve and wetlands were annexed in to the park making it the largest park in East Africa at 20226 km2 with the region’s largest concentration of elephant

Gazetted in 1977, Rubondo Island is an important breeding ground for migratory birds and fish as it was once the only well protected area of Lake Victoria. About 80% of the park is covered by dense forest, providing a variety of habitats to wildlife ranry in Tanzania bordering the sea. It offers a unique combination of both marine and mainland flora and fauna. The open ocean with coral reets changes Inland to mangrove forest ecosystems, and in to salt pans. Further Inland, the Wami River is the most important freshwater source beside numerous seasonal rivers and dams.

Tanzania’s oldest and most popular national park, world heritage site and recently proclaimed th Wonder of the Worls. The ing from savannah, open woodland, papyrus swamps to dense forest. The park is 456.8km2 of which 220km2 is water comprising 11 small islets. 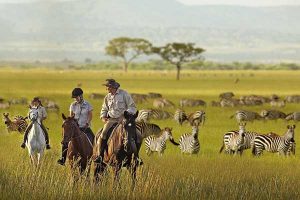 At tire centre of the historic triangle of Bagamoyo, Pangam and Zanzibar. Saadani covers 1100km2. ft is the only wildlife sanctuary’ in Tanzania bordering the sea. It offers a unique combination of both marine and mainland flora
and fauna. The open ocean with coral reefs changes Inland to mangrove forest ecosystems,and into salt pans. Further Inland, the Wami River is the most important freshwater source beside numerous seasonal rivers and dams

Tanzania’s oldest and most popular national park, world heritage site and recently proclaimed 7th Wonder of the World, the 14.763km2 Serengeti is famous for The Great Migration. The Serengeti offers the most scintillating gameviewing in Africa alt year round. Its ecosystem, the oldest on earth andunchanged for millennia, is located in north Tanzania and extends to south-western Kenya, spanning some 30.000km2. The spectacle of predator versus
prey dominates – with a large population of lion, as well as leopard, cheetah, all three African jackal species, and spotted nyena.

During the dry season, the Tarangire River shrinks and draws multitudes of thirsty wildlife – with the greatest concentration outside of the Serengeti. The evergreen swamps are the focus for 550 bird varieties-the most breeding 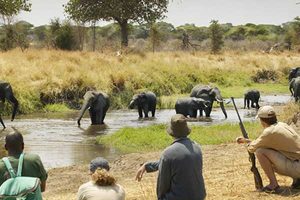 species in onehabitat m the world. Flocks of the colourfulyellow-collaredlovebird, rufous-tailed weaver and ashy starling are endemic to the dry savannah of rvorth-central Tanzania. Tarangire National Park covers 2850km2. Not only do you find pythons and leopards In trees here- but lions too. Udzungwa Mountains National Park. The forests of Udzungwa consist of verdant glades of 30-metre high trees. At 1,990km2, Udzungwais the largest and most biodiverseof a chain of large forest-swathed mountains. Known collectively as the Eastern Arc Mountains, the
area has been dubbed the African Galapagos for Its diversity of endemic plants and animals- including the African violet. Its ciosed-canopy spans altitudes of 250m to above 2,000m. Birds include the green-headed onole, numerous
secretive Eastern Arc endemics, and a forest partridge. The Iringa red colobus and Sanje Crested Mangabey are found only here.

The forests of Udzungwa consist of verdant glades of 30 metre high trees. At 1992km2, Udzungwa is the largest and most blodiverse of a chain of large forest-swathed mountains. Known collectively as the Eastern Arc Mountains, the area has been dubbed the African Galapagos for its deversity of endemic plants and animals including the African violet. Its closed -canopy spans altitudes of 250m to above 2000m. Birds include the green-headed Onole, numerous secretuve Eastern Arc endemics, and a forest partridge. The Iringa red colobus and Sanje Crested Mangabey are found only here. 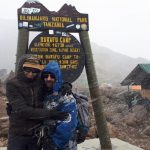 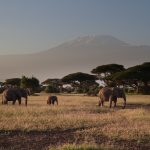